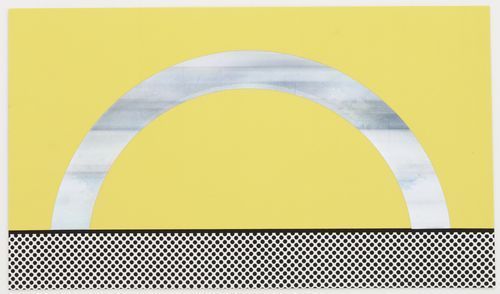 Signed and dated in pencil on the reverse, co published by Original Editions and Leo Castelli Gallery, New York A copy of this print is held in the MoMa collection NY.

materials
Screenprint in colours with iridescent silver Mylar collage, mounted to composition board (as issued)
dimensions
27.3 x 46.3cm
edition
of 100

Roy Lichtenstein was born in 1923 in New York, where he died in 1997. His work has been exhibited extensively worldwide. Lichtenstien was an American pop artist. During the 1960s, he became a leading figure in the new art movement. Inspired by popular advertising and the comic strip, Lichtenstein produced precise compositions that documented while they parodied, often in a tongue-in- cheek manner. He described pop art as "not 'American' painting but actually industrial painting". His paintings were exhibited at the Leo Castelli Gallery in New York City.